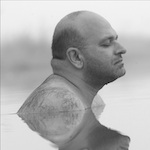 Engaged with the shared environmental and ethical concerns of a new generation, Atul Bhalla is a conceptual artist who examines this new generation’s relationship to water and its cultural meaning. Concerned with issues of relentless urbanization, he examines how historical as well as colonial and post-colonial urban planning and administrative policies, or lack thereof, define the manner in which the city meets water. His practice engages with many of its physical, emotive, historical, cultural, religious and political manifestations. He further participates in the politics of water by subtly juxtaposing these manifestations with the significance of water as an essential human right. As such, Bhalla’s works are universally pertinent. They have an individual as well as collective meaning. They address issues of contemporary needs versus consequent roles of natural, cultural, or built heritage and may be used to decode the contemporary landscape in India by tracing many social constructions and discourses.

While Bhalla applies photography as a conceptual framework for most of his works, he is best known for his performative photography. What is most significant in his technique is that he renders his works definitively intimate to the viewer by using himself in order to incorporate the experiential. He constructs narratives of direct experiences through sequential series using multiple images.

Born in 1964, Atul Bhalla received his M.F.A from School of Art, Northern Illinois University , USA and his B.F.A. from College of Art, Delhi University, New Delhi. He lives and works in New Delhi.