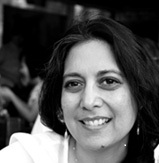 Mishi Saran
Ms. Mishi Saran was born in India and spent the first ten years of her life in New Delhi. Since then, she has lived in Switzerland, Indonesia, the United States, China, Hong Kong and Korea. She moved to Shanghai in 2006. She is the author of the travel book-cum-memoir Chasing the Monk’s Shadow: A Journey in the Footsteps of Xuanzang.(Penguin, 2005). To research the book, she spent a year tracing the footsteps of Xuanzang, a 7th Century Chinese Buddhist monk who travelled along the Silk Road from China to India, passing through Uzbekistan, Kyrgyzstan, Pakistan and Afghanistan. Her first novel, The Other Side of Light is published by HarperCollins India (June 2012). She is currently working on her third book, also a novel, set in Shanghai in the 1930s.
Ms. Saran writes in English and is also fluent in Mandarin, French and Hindi. Following an undergraduate degree in Chinese Studies from Wellesley College (USA), she worked in Hong Kong as a news reporter and as a freelance writer. Her articles have appeared in a variety of international publications including the Financial Times, the International Herald Tribune, the South China Morning Post and the Asian Wall Street Journal. Her short stories have won awards and been broadcast on the BBC.